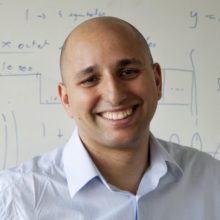 Mérouane Debbah entered the Ecole Normale Supérieure Paris-Saclay (France) in 1996 where he received his M.Sc and Ph.D. degrees respectively. He worked for Motorola Labs (Saclay, France) from 1999-2002 and the Vienna Research Center for Telecommunications (Vienna, Austria) until 2003. From 2003 to 2007, he joined the Mobile Communications department of the Institut Eurecom (Sophia Antipolis, France) as an Assistant Professor. Since 2007, he is a Full Professor at CentraleSupelec (Gif-sur-Yvette, France). From 2007 to 2014, he was the director of the Alcatel-Lucent Chair on Flexible Radio. Since 2014, he is Vice-President of the Huawei France R&D center and director of the Mathematical and Algorithmic Sciences Lab. His research interests lie in fundamental mathematics, algorithms, statistics, information & communication sciences research. He is an Associate Editor in Chief of the journal Random Matrix: Theory and Applications and was an associate and senior area editor for IEEE Transactions on Signal Processing respectively in 2011-2013 and 2013-2014. Mérouane Debbah is a recipient of the ERC grant MORE (Advanced Mathematical Tools for Complex Network Engineering). He is a IEEE Fellow, a WWRF Fellow and a member of the academic senate of Paris-Saclay. He has managed 8 EU projects and more than 24 national and international projects.

He received 17 best paper awards, among which :

Abstract: “Mobile cellular networks are becoming increasingly complex to manage while classical deployment/optimization techniques are cost-ineffective and thus seen as stopgaps. This is all the more difficult considering the extreme constraints of 5G networks in terms of data rate (more than 10 Gb/s), massive connectivity (more than 1000000 devices per km2), latency (under 1ms) and energy efficiency (a reduction by a factor of 100 with respect to 4G network). Unfortunately, the development of adequate solutions is severely limited by the scarcity of the actual ressources (energy, bandwidth and space).

Recently, the community has turned to a new ressource known as Artificial Intelligence at all layers of the network to exploit the increasing computing power afforded by the improvement in Moore’s law in combination with the availability of huge data in 5G networks. This is an important paradigm shift which considers the increasing data flood/huge number of nodes as an opportunity rather than a curse. In this talk, we will discuss through various examples how the recent advances in big data algorithms can provide an efficient framework for the design of 5G Intelligent Networks.”